How to Use #Hashtags: The Right & Wrong Way What is a hashtag, you ask? A hashtag is a word or phrase preceded by a hash or pound sign (#), used to identify messages on a specific topic. Hashtags are one of the most effective social media tools used to stay relevant, target an audience, generate conversation, and/or build your brand’s identity.

Let’s start breaking a few things down to make your next hashtag more effective so you can get more followers, improve your engagement rate, and build a community around your business.

Make it brief but memorable

This initial step is probably the most challenging, simply because you’re going to want to make sure you choose something that’s catchy and will grab your audience’s attention, which can be easier said than done. Keep in mind the idea is to get your brand’s message across to your audience and more importantly stand out in all the noise.

For starters, it’s important to keep your hashtag short and sweet. If a hashtag gets too long, you run the risk of your audience losing interest and not paying attention. In fact, Microsoft recently did a study showing that the average person’s attention span only lasts twelve seconds, YIKES! That being said, don’t be afraid to keep it simple.

REI’s #OptOutside campaign is a great example of how a hashtag can start a conversation and build a community. REI’s main objective with this particular campaign, started in 2015, was to encourage and entice people to spend more time outdoors during the holidays, particularly for Black Friday. So, REI gave all 12,000+ of their employees Black Friday off to allow them the opportunity to get outside and enjoy the great outdoors. The movement was such a success that roughly 1.4 million people and 170 organizations jumped on board around the world.

REI didn’t reinvent the wheel; they just knew those that have an affinity with spending time outside would resonate with two very simple words. Even so much so that #OptOutside has been used in over 16.8 million posts, and that’s just on Instagram alone.

Evoke an emotion, but watch out for turbulence

Next on the list is regarding how well you do at triggering an emotional connection with your audience. We can all relate to a childhood memory that makes us feel warm and fuzzy, or even worse a bad experience. All we’re really saying here is make sure you do your research so you’re not opening a can of worms of negativity. Take a step back and make sure you put yourself in the shoes of your followers and your potential followers.

Let’s break down two examples, the first one speaks to a campaign that was run by a very prominent internationally known food chain and the other is a campaign that did a spin off related to a kid’s interactive book dating back to 1984.

A few years back McDonald’s ran a campaign called the #McDstories. McDonald’s kept the hashtag short, it’s easily legible and they even capitalized just the right letters to make sure their readers would identify this hashtag without even thinking twice about it. Well, unfortunately, things took a turn for the worse and possibly at warp speed. Two hours to be a matter of fact. Initially McDonald’s was hoping that people would chime in and share pleasant experiences relating to the Happy Meal, but it turned into a #Bashtag campaign and people were writing all kinds of bad things, from service-related issues, food quality or even bodily functions. Yuck!

On a more positive note, let’s chat about Doritos and Matthew McConaughey’s #FlatMatthew campaign that debuted during this year’s Super Bowl LV. The commercial ended up ranking in the top eight commercials, according to the Washington Post. One can’t help but accredit their success to the fact that the majority of the viewers once had a Flat Stanley at one point or another. Kudos Doritos and Mathew, you certainly pulled on our heartstrings!

When social media really started using hashtags people were going rogue. You might remember seeing posts from well recognized brands or influencers using 20+ hashtags on a single post. Major overload! Be careful with this, the last thing you want is your campaign, or even worse for the brand itself, to appear like a scam. You can be just as successful with two to five hashtags; however you’ll need to do some testing to determine what works best for your business. 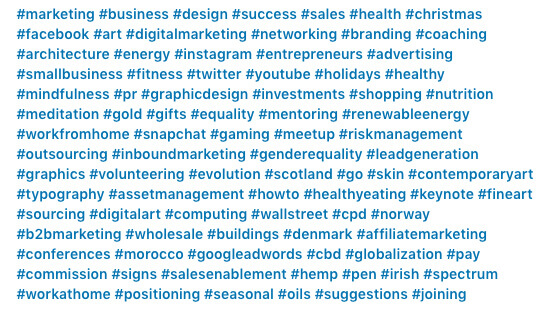 This trick is easy to remember, all you need to do is remember to capitalize the first letter of a new word within the hashtag. Realistically, people will simply glance over the tags and keep moving, so you need to make sure the reader can easily interpret the correct meaning, ensuring people don’t create their own narrative.

Lastly, make sure you do your due diligence and vet out all your options. Let’s be honest, you probably wouldn’t want to launch a hip and trendy men’s underwear line that was about to launch an over the top marketing campaign just to find out that your hashtag #FreeWilly is actually used by animal activists that are trying to help orcas living in capacity.

At the end of day, keep in mind that #hashtags aren’t owned by anyone and, as always, time heals all wounds. So get out there, have some fun with this stuff and experiment a little bit, as long as you stay true to your brand your audience will follow. Why Conversion Goals Are Essential for Performance Tracking Adapting to Social Media as the New Ecommerce Search Engine